This job was a tall order. Our Toronto-based young professional clients purchased this home in October, closed at the end of November, wanted to completely gut the kitchen and move in at the end of December.

They had a bit of flexibility around actual dates as they had the option of staying with family locally until we were done, but given that they were going to be telecommuting it was important to them to have their home offices set up to avoid lengthy interruption. Lucky for them, and us, our team who traditionally travels at Christmas was all staying home. Happy Holidays!

A quick visit to the site pre-closing was all we needed to begin our planning and design of the new kitchen. Once in the space however, it became clear that while the previous owners had recently renovated the home to prepare it for market, they had not done so in a manner that maximized efficiency or created more light in a dark space.

The existing plan saw the back of the main floor bisected by the kitchen with the formal living and dining rooms on one side and a family room, with fireplace and sliding doors to the in-ground pool on the other. Visions of their yet to be conceived of children and their wet friends running in and out of the family room danced through our heads.

A major re-think was called for. After-all, wouldn’t it make more sense to have direct access from the pool, patio, barbecue area to the kitchen? Cocktails, snacks, wet feet and hands, juicy steaks?

We did away with the old brick fireplace in the former family room, added a new window to allow more natural sunlight in, and moved the kitchen from the centre of the home to the side with the sliding glass door.

The formerly dark cramped, under lit kitchen in the middle of the house unfolded into a nice long linear functional bright space, with a beverage centre that can almost be reached from the deck!

To maintain the new more modern aesthetic throughout the house a bit of scope creep was necessary. The formerly carpeted colonial staircase was upgraded with dark stained oak treads, newel post and banister, cloud white risers and new simple spindles. These were capped with a lovely, modern, slightly patterned stair runner.

The real showpiece though is the floating staircase effect created by partially removing the wall between the former kitchen and the foyer. This adds both architectural beauty and allows for the natural sunlight to freely bounce between the front and the back of the house.

The former dining room was somewhat expanded into the living room to create a more spacious family room and the former living room with big beautiful window is now their collective home office. 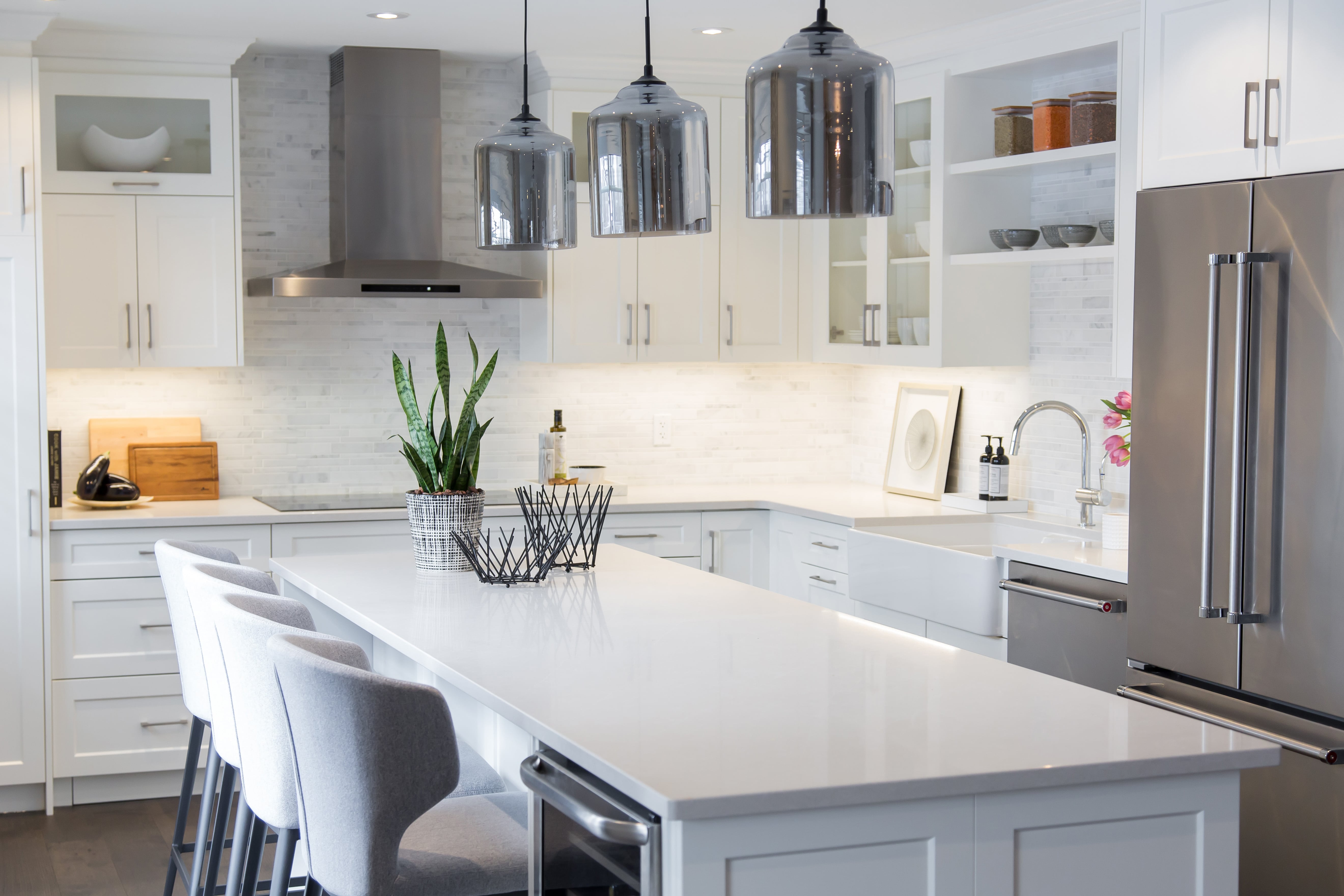 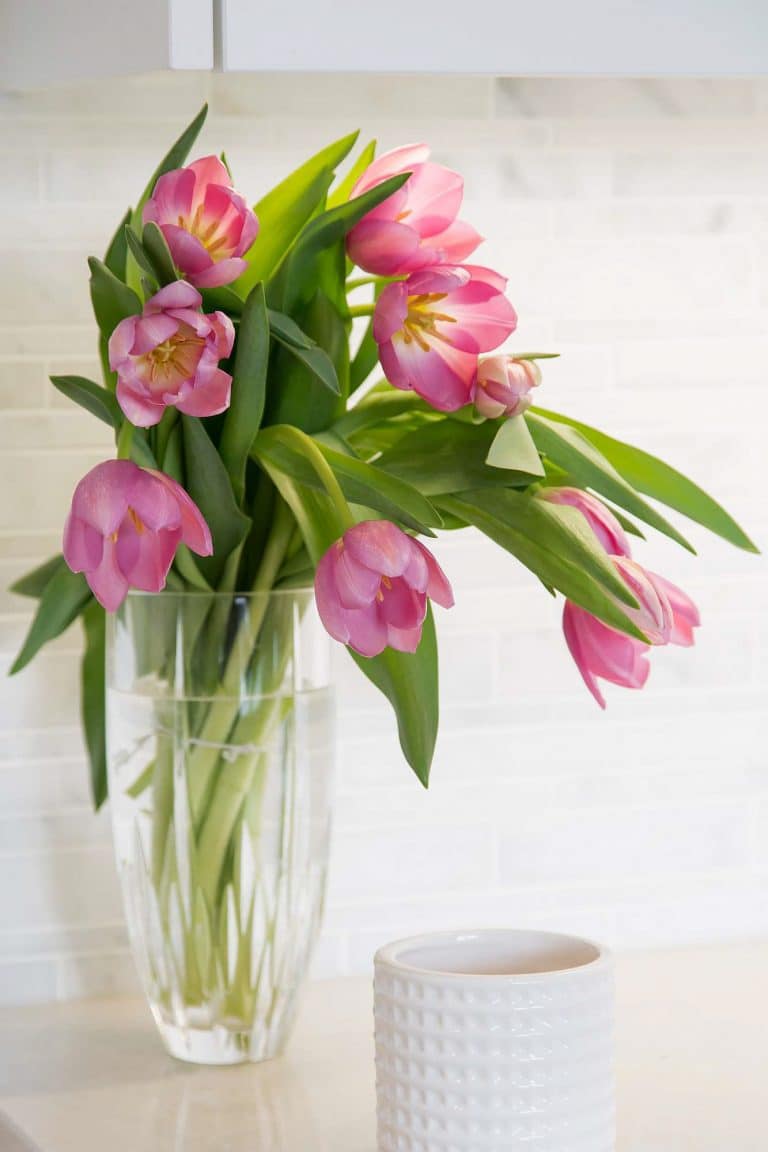 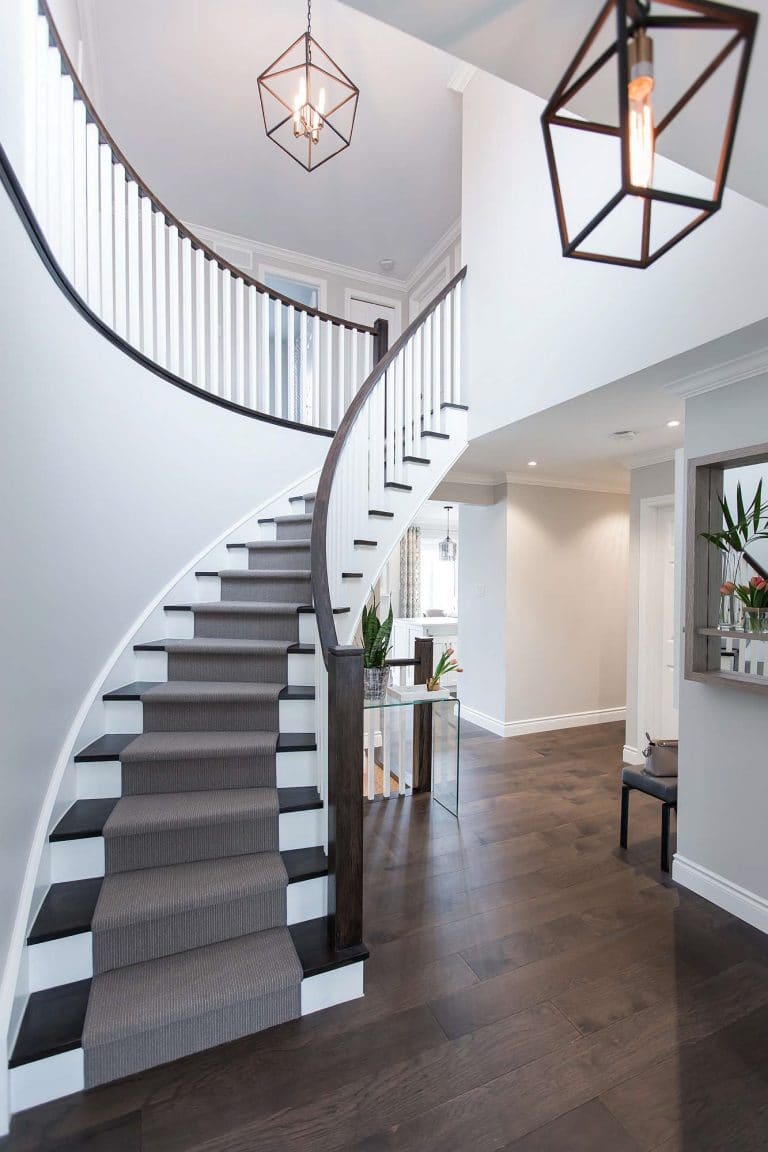 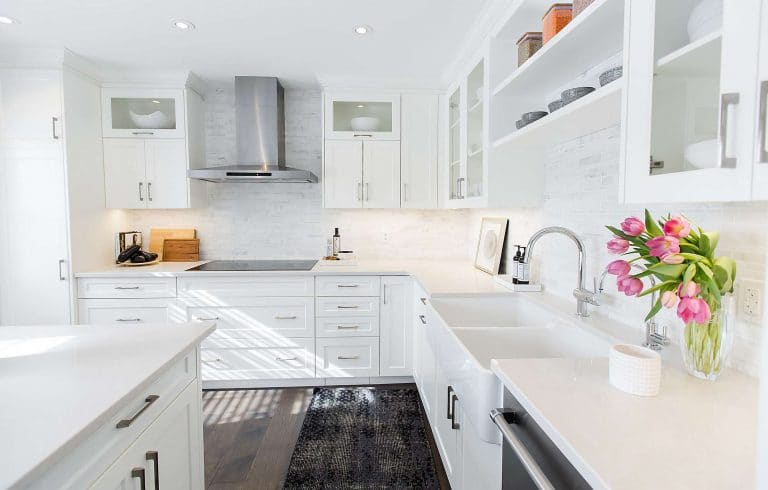 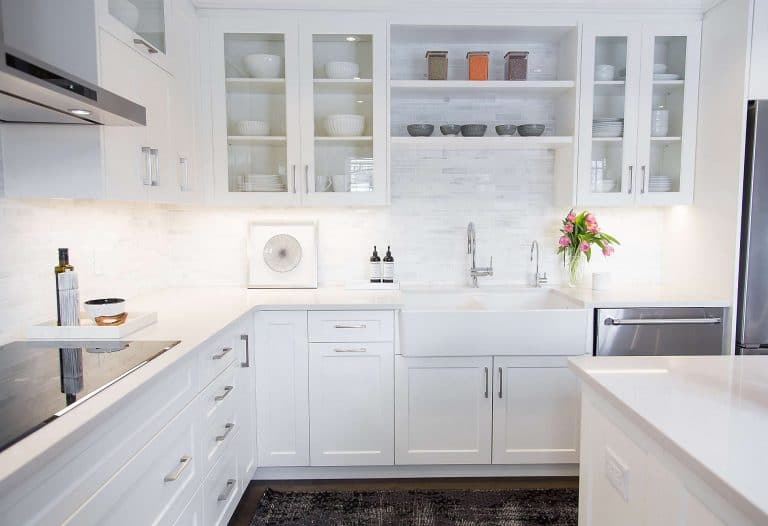 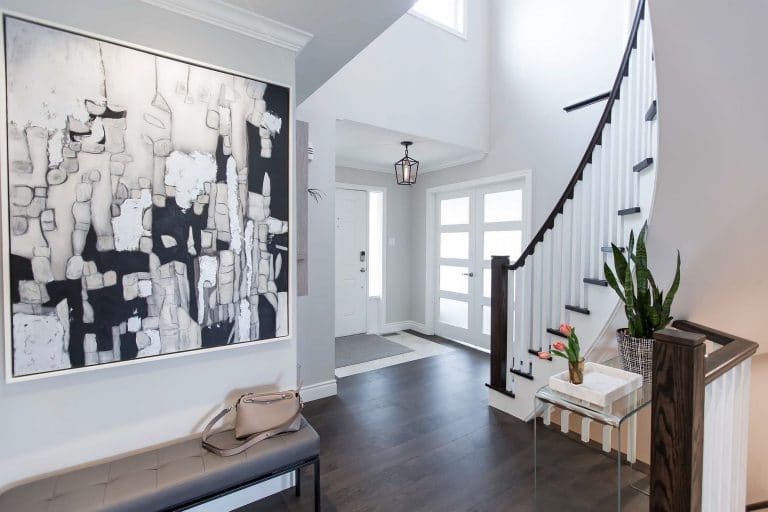 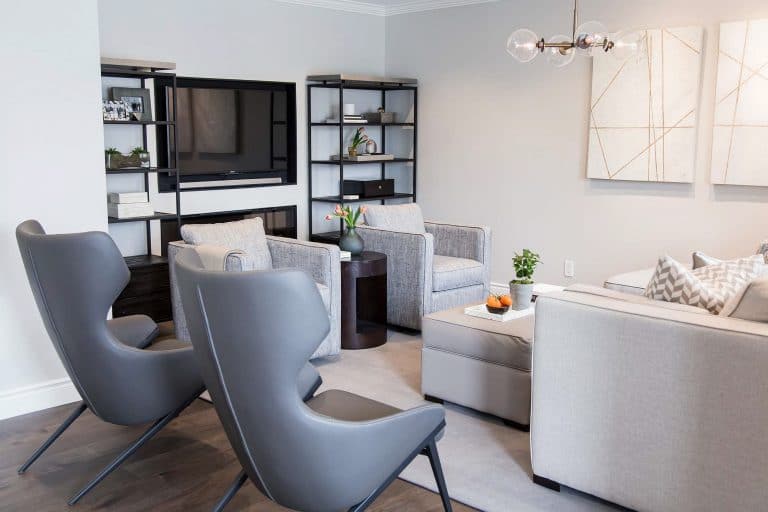 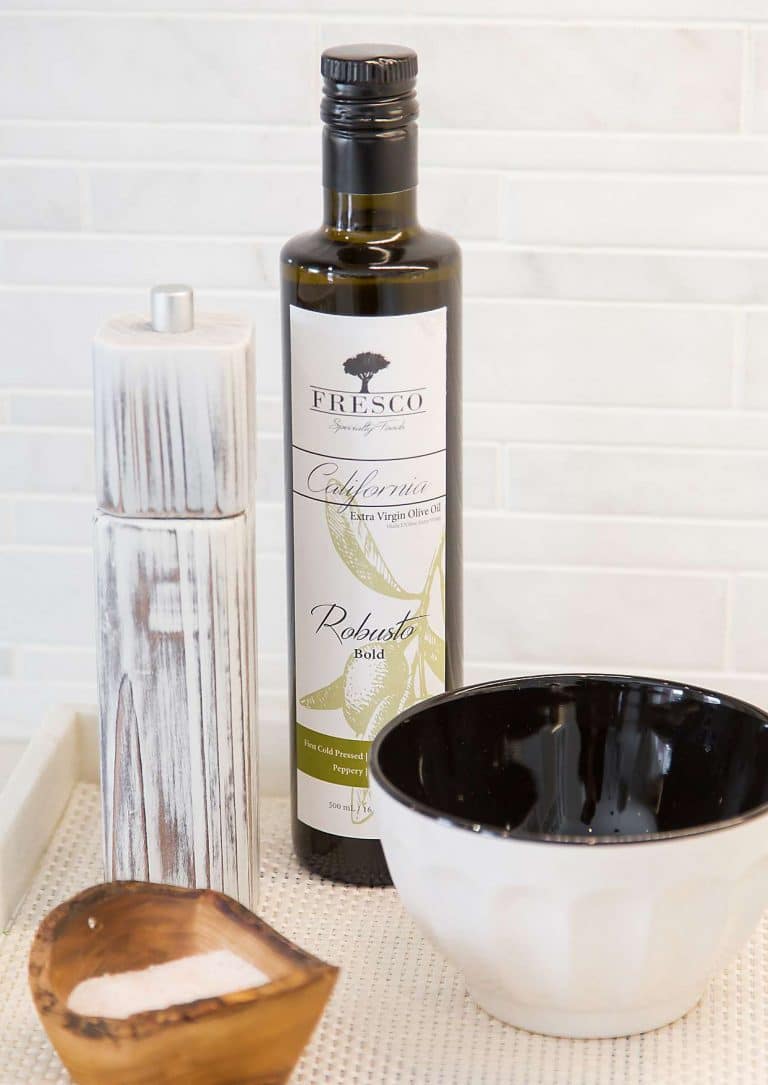 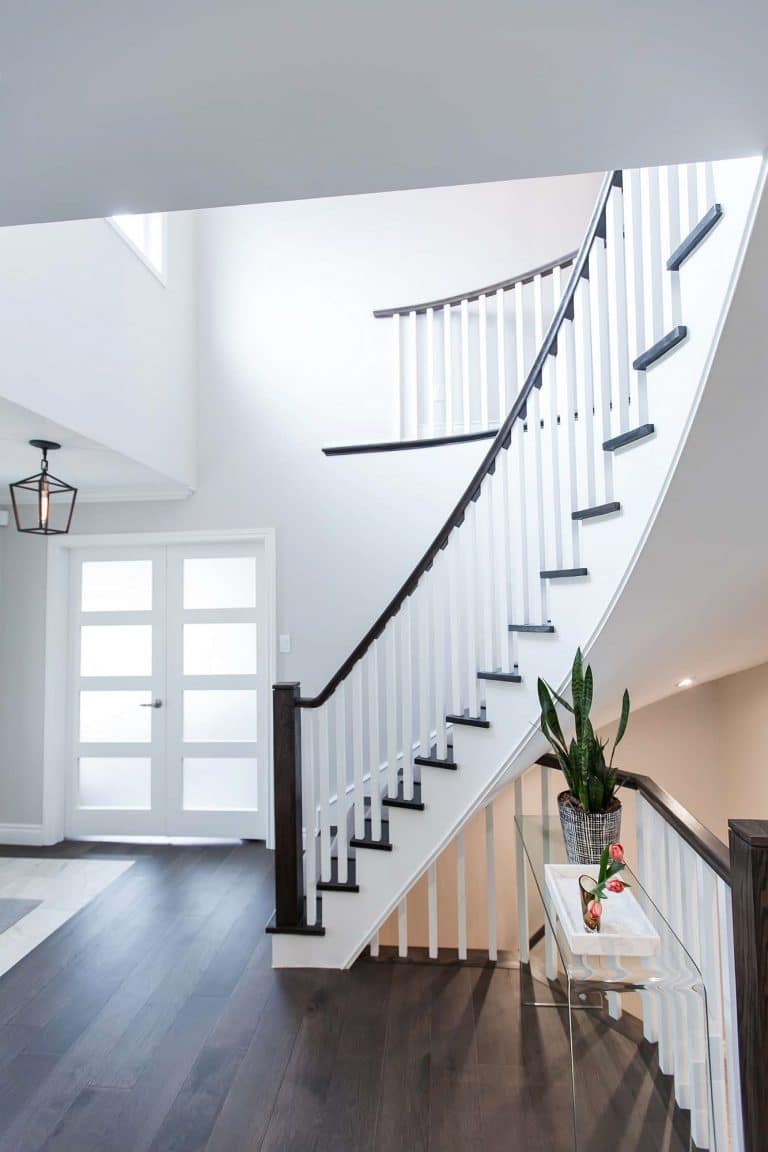 Having Andrea and her team of experts work with us to design our new home was like a dream come true. With little experience in interior design, my husband and I feared the process of renovating our entire house would be overwhelming. But in just one meeting, Andrea put those worries to rest. She helped us craft our vision by offering her recommendations and guidance but also by listening to our feedback. She was able to put in words things we wanted but didn’t know how to express. We felt that Andrea and her team genuinely cared about making sure we loved every aspect of our design – from the paint colours to the fabrics of every piece of furniture to the art and beyond.

We had confidence that she fully understood our tastes and style. In fact, many times asked Andrea to simply make some of the decisions for us and we were never disappointed. Once the renovation was complete, we experienced their “turnkey” service which was the icing on the cake. Our bookshelves probably would have remained bare for months to come if we didn’t have Andrea and her team provide all the finishing touches from the greenery to the books and various other decorative items that made the space sing.

We’re so pleased with how our new house has evolved into our own, one-of-a-kind show home that feels modern and elegant yet warm and inviting.